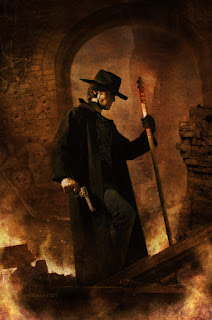 My favorite character of all time is probably Harry Dresden from Jim Butcher’s fantasy series, The Dresden Files. Harry has everything needed for a great character. A great character needs to be someone you think could truly exist. Harry Dresden is definitely someone you can relate to and imagine knowing and liking. In the first book in the series, Harry is a rather unsuccessful wizard for hire. He spends most the time in his office reading paperback novels. But he grows and changes throughout the series. By the twelfth book in the series, Changes, to save his daughter, he becomes the Winter Knight working for Mab, the Queen of Air and Darkness. He tries to commit suicide to get out of this arrangement because he fear becoming corrupted. As the series continues, we see him fight against this corruption. The series is now fifteen books long, and he hasn’t grown the least bit stale like some characters in due in long series. I wait impatiently for each new installment in the series and devour them once I have my hands on them. He practices cool magic, and he’s very good at it, but it doesn’t always get him out of a jam. Sometimes he needs to use other resources or be rescued by others. Sometimes he simply fails, as all of us do at times. He tries to do the right thing, but like all real people, he is flawed. He sometimes makes serious mistakes. It can tell him awhile to realize what he’s done wrong, and those realization can be devastating. He fights authority and hates bullies. He has a sarcastic sense of humor, and it can get him into trouble at times. He is a great friend to have. And most importantly, he owns a cat. How can you not love a cat lover? If you haven’t read any of the Dresden Files, you are missing out on some great reads. The Amazon link to the first book in the series is below to get you started. If you’ve read these books, leave a comment on your opinion of Harry Dresden.