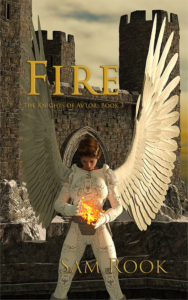 The thrilling conclusion to the Knights of Av’lor trilogy!

Trapped on Av’lor and left for dead by her betrayer, Kathryn’s unrelenting determination is the only thing that might overcome the invading Zahkrinon army.

With the portal destroyed and the Zahkrinon army fast approaching, Kathryn and Lanclor have no choice but to focus on the survival of the Knighthood before they can consider rescuing Rachel. Unexpected events threaten their victory and the combined Av’lorian and Earth forces struggle to survive as their numbers dwindle.

They find the Zahkrinon are more dangerous than they had ever imagined.

The tides of the battle turned for the worst when the dark elves used their own physical Shields to brush aside the brownwings’ assault and brought their hidden weapons to bear. A bow and arrow was such a simple weapon and normally wouldn’t penetrate Kate’s physical Shield, but the dark elves had worked some type of magic into the arrows with a devastating effect.

Similar to the daggers used in the assault at the castle, the arrows drove through the knights’ armor like a hot knife through butter. Knights fell like mown wheat around her and Hal was the only thing that kept the arrows from Kathryn. Hal had jumped in front of her just as the dark elves had fired. He staggered backward and she wrapped her arms around him from behind. His weight was too much for her to bear and she toppled backward with him on top of her.

Kate could barely breathe under Hal’s impressive mass and tried without success to move his weight to the side. Her wings ached in protest and she tried to go through her mental list of spells to come up with a solution. She could still see the battle going on and the dark elves turned their attention back to the Royal Guard. The elves raised their bows and prepared to fire.

Sam Rook lives in Vermont with her husband and two children. Her passion for fantasy novels began in high school with her desire to write following shortly thereafter. Software engineer by day, fantasy author by night, she strives to give her readers a chance to enjoy worlds that transport them away from the stress of everyday life.

Sam will be awarding a $20 Amazon or B/N GC to a randomly drawn winner via rafflecopter during the tour.