Welcome my guest, Adam Henderson, or the badass nameless one. No, I’m not confused the author with the character. 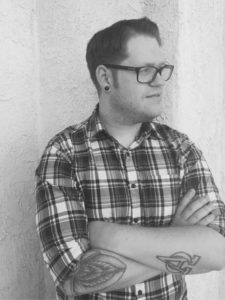 Adam Henderson was born in the geographically oddity that is the ‘Gateway to Death Valley’, otherwise known as Ridgecrest, CA, which is set on the right hipbone of the Mojave Desert several hours away from everything.  Sprung from a family of creative ilk, he found his desire for the wonders of writing as a high school senior and just a year later began to tackle the proverbial herd of bulls of character and world building that slowly developed into a story with all its novice luster.

Married and working as a technical writer/editor in his hometown, he enjoys a full life of serving his community, playing drums and bass, and improving his culinary skills one botched recipe at a time.  A sports and film fan, he finds inspiration everywhere, discovering it’s people that fuel his writing.

I think I was always meant to be a storyteller.  I was not the most extroverted kid growing up and found a lot of joy in playing with action figures, creating characters and stories.  This ran its course as I grew older but still had the desire to create.  In high school, as I began to read fantasy and sci-fi novels; I found myself suddenly having ideas that I knew could become a book.

My biggest influencer as a fantasy writer has to be Robert Jordan whose Wheel of Time series sucked me into a vibrant world of magic, political intrigue, and best of all fleshed out characters who irritated, intrigued, and inspired me as a reader.  Other authors who have impacted me are Patrick Rothfuss for his lyrical writing style, Brandon Sanderson for his creative magic systems, and Steven Erikson for his in-depth world building.

I’m very much a plotter in the beginning of a project, but I leave enough open space so I can allow the characters and story to take turns and twists I did not anticipate.  It’s a long leash approach.

The only weird habit I have is when I get stuck with where the story is going, I put on a movie or show (usually something that has swords and shields in it) and I let that inspire me.  It usually always works and seems to reset my creative muscles.  I find that stepping away helps me re-center my thoughts.

I’ve been working on the first book of my Ravanguard series for nearly ten years now.  It’s currently in its fifth revision effort, and after spending all this time with it, I’m still excited about the story and characters.  I’m very much a believer in writing a fantasy series that explores the identity of the characters who make up the main narrative.  Each of the three main protagonists are different, coming from different backgrounds and experiences.  They each struggle through conflicts internally and externally, having to make difficult decisions.  Sometimes, these decisions prove valuable and other times the consequences are dire.

The hardest part of writing the book for me has always been the long game.  I envisioned this as a series and a rather long one.  As I wrote over the years and began to explore the expanse of the world, I realized that it kept growing on me.  While I knew I needed to rein it in, I knew also that I needed to make the right choices about how much to reveal in the first book.  Stephen King said, “Good books don’t give up all their secrets at once.”  I believe wholeheartedly in this statement and that’s how I approach writing epic fantasy.

If anyone wants to explore my writing style, I have an ongoing flash fiction series released on the 30th of every month and additional short stories available in my newsletters.  All of these are set in a different world rich in magic and political turmoil as part of The Shoals to the Hallowed series.

As for the Ravanguard series, I am actively working on the next books and novellas.  For a while, I didn’t know where the story was going after the events of the first book, so I just started writing forward.  This was invaluable to me because it helped me solidify the major and some minor story arcs.

So Speaks the Gallows 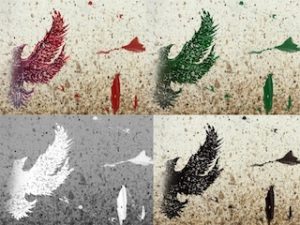 Kerr Jaro is no longer permitted to use his name.  Saved from death by the infamous mercenary unit, the Ravanguard, he now bears the title of “Nameless”.  Friends are rare among the killers and miscreants whom he is supposed to trust and impress.  They will name him if they find him worthy.

As the Ravanguard presses into the nation of Prenia, ambition and thoughts of plunder are sabotaged by forces they cannot identify.  Unwilling to abandon their mission, Kerr must adapt as greater webs of conspiracy unfold.  To survive, he needs a name, but to earn a place within the ranks of the Ravanguard could only prolong certain death.

An echo of greetings met the Noose to which he gave a simple nod, planked walkway creaking under his boots.  The execution had not occurred yet.  Precedence and ceremony continued high above in the sunlight while the Ravanguard waited in the depths of the chasm.  For the Noose, he planned and considered all options of the new addition to the unit.

“Here he comes!” someone called from the front where the men who he called the Gallows waited.

The Noose looked up, seeing the falling body, not able to imagine the fear and emptiness of mind the hooded man endured.  Did his body go through some unexplainable transformation as fear ripped away at everything he was?  Some said so and there were examples of men who had taken the chasm drop and were truly disturbed.  What did a man do or think as he fell into certain death?  The Noose had never experienced it.  No…his experience had been a short drop.

Breaths held in ready throats as the man’s body dropped like a lead weight.  Every eye tracked his descent until the reinforced net anchored into the chasm wall caught him with a jerk.  The sound was like a tree breaking, cracking with a wincing intensity.  The Ravanguard’s engineers, the dredgers, had discovered upon dozens of tests the exactness of give and elasticity for the netting to catch and not break.  The Noose’s fortitude for such things of science did not root themselves deep.

A moment of stillness followed once the netting stopped its bunging.  The hooded man breathed hard before his voice came.  Gibberish—high-pitched and near wailing—broke from his dried throat.  Fear had not subsided.  It would not for some time as he tried to make sense of the sudden stop when he should have continued to fall.

The men closest to the netting reached out and took hold of the squirming man, pulling like wolves would a fresh meal.  He struggled but they were too many.  His knees struck the walkway boards hard and the hood was ripped away, revealing the pale face of a man nearly scared to death.  Dark, slightly curly hair like his father with sharp features like that of his mother, the Noose could place the man easily.  Hopefully, none of the others would for the man’s father was a bastard at heart and had plenty of enemies.  The caught man’s brown eyes squinted and searched in the dim lantern light, never settling on any one thing as the Ravanguard men crowded over him.  Their cheerful welcome was a gaggle of teasing threats and pricking sarcasm as the smell of sweat filled the already compact air within the chasm.  His uncertainty would only increase now.

The Noose’s eyes pressed firmly on the man who was no longer Kerr Jaro but a Nameless of the Ravanguard.