SECRETS OF THE HANGED MAN 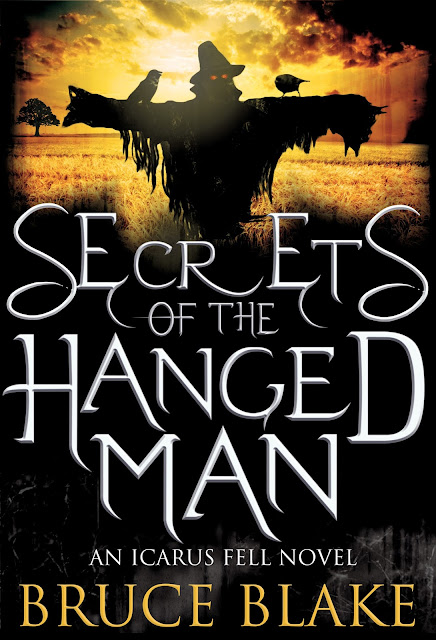 Icarus Fell thought the afterlife couldn’t get any worse…until Hell came looking for him.

When you are the orphaned child of a disgraced nun, and you’re saddled with a ridiculous name like Icarus Fell, you don’t expect things can go drastically downhill.

Until death comes along and an archangel recruits you for a job you screw up so badly you nearly lose your son to a demonic priest and a fallen angel.

And then, burdened by the lives lost because of your foul ups, you travel to Hell, a detour that costs you more dearly then you could ever have imagined.

No, things couldn’t get much worse in the afterlife…unless Satan sends his lap dog to bring back the one thing he thinks belongs to him.

Why couldn’t death be easy?

The man tottered past the door without a second look and entered my territory. I held my breath. I didn’t imagine for a second he’d hear me breathing, but it’s what you do when you don’t want people to find you, a tactic every kid learns playing hide-and-seek.

He stopped a few feet away, wobbling side to side like a man standing on the deck of a ship at sea rather than a stable patch of cement behind the fifth best Italian joint in town. I didn’t fancy the look of him: he resembled a man unable to hold his booze.

Desperate to prove me right, he jerked to the side, bent at the waist and threw up on a pile of garbage bags.

“Jesus, dude. Careful. I think you got some on my shoes.”

Startled, the man fell back, his ass squishing on a damp piece of cardboard. He surveyed my dark corner, staring right at me without seeing me, probably shocked at a trash heap that spoke English. I toyed with the idea of fucking with him, but my annoyance at his presence squashed the desire. It made more sense to get rid of him because the dinner rush would be done soon, and I didn’t want to share the bounty.

I leaned forward and his gaze found me, not exactly like looking in a mirror for him because his rumpled and creased business suit and recently-cut-but-out-of-place short hair didn’t match my look. In eight months, I’d been near a barber once to ask for change, never for a trim. And opportunities to wash oneself or one’s clothes came along infrequently when living on the street—ditto the chance to shave—so I’d done neither in weeks. My patchy teenage beard probably made me look more like a crazy man.

“S…sorry, ah, dude.” The man wiped his mouth on his sleeve, then his hands on his pants. “I didn’t see you.”

He didn’t sound as intimidated as I’d hoped. “No sweat, man. Just don’t puke on me again.”

He clawed at trash bags, clambering in the manner of a turtle flipped on its back until he got his feet under him, then brushed at the grime on his overcoat, smudging it across the lapel with his grubby hands. Smearing complete, he stood watching me, arms dangling loose at his sides.

I faded into the shadows, looked at the end of my joint to make sure it was still lit, then took a deep drag, the burner’s orange glow illuminating my lips and the tip of my nose. With one eye closed to keep the smoke out, I held my breath for a few seconds, then puffed it free of my lungs in a swirling cloud. The man breathed deep, inhaling the sweet odor of marijuana, and looked at me expectantly.

“You want a hit, dude?” Maybe if I shared my weed, I wouldn’t have to share the food when it arrived.

He took a step, hand extended to accept my offer.

I shuffled over in a rustle of cardboard and plastic, creating space for him to sit and thinking that, if I got him high enough fast enough, he wouldn’t notice when room service showed up. The guy looked a lightweight, so it shouldn’t take much.

He slouched forward to take a seat and lost his balance; on the way down, his forehead smacked against the brick wall and he tumbled into my lap. I jerked my hand away, barely keeping him from knocking the joint out of my fingers.

“Come on, man. First you lose your cookies on me, now you sit on me? Get it together.”

“S-s-sorry.” The stuttered word bore the distinct slur of inebriation, or maybe the ding he’d taken to the noodle caused it. He shinnied himself off me, coming too-close-for-comfort to pawing my balls as he did, then scooted his butt around until he found a comfortable spot amongst the garbage. “My name is Jack.”

He held out his hand for me to shake, but instead of the usual societal formalities, I offered him the joint. Jack took it between his thumb and index finger and inhaled with the exaggerated sucking sound made by people who don’t normally smoke. He held his breath and passed the reefer back. I grinned when his lungs revolted and a held-in cough bulged his cheeks, making him resemble a poor impersonation of Dizzy Gillespie.

I took another pull of the joint. “I haven’t seen you around before. You’re not dressed like most of the guys who hang out here.”

He looked down at his suit and I followed his gaze to the streak of puke down the front of his jacket, the spots of grime on the lapel. His purple tie hung askew and the creased tails of his mauve shirt hung over his belt.

“Had a fight with my girlfriend,” he said and belched the mixed aroma of puke and ganja. I waved my hand to clear the air; he swallowed and grimaced. “She’s pregnant.”

“And this is how you celebrate?”

Jack shook his head and winced with pain. “Nothing to celebrate. Kid can’t be mine.”

He blinked, then rubbed his hand across his eyes like someone scrubbing the sleepiness away. I waited for a second, but he didn’t seem to have heard me, so I elbowed him in the ribs to get his attention.

He took the joint, blinking. I thought the smoke caused it but, when he turned, I saw blood flowing into his eyes from the gash he’d given himself in the forehead. A trail of dark fluid ran from his hairline, past his eye, along his cheek and down to his jaw.

“Dude, you got some blood there.”

Jack’s eyes rolled up, looking for the wound like a dog chasing its tail, then he giggled at himself for trying to see his own forehead. He transferred the joint to his left hand, touched his head and lowered his fingers in front of his eyes.

To some, death is the end; to others, a beginning. To Icarus Fell, it should have been a relief from a life gone seriously awry.

But death had other plans.

But the man claiming to be the archangel tempts him with an offer he can’t ignore–harvest enough souls and get back the life he wished he’d had.

It seems Icarus has nothing to lose, until he botches a harvest and the soul that went to Hell instead of Heaven comes back to make him pay by threatening to take away the life he hoped to win back.

To save the wife and son he already lost once, Icarus will have to become the man he never was. Somehow, he will have to learn to believe.

ALL WHO WANDER ARE LOST

Except one man who wishes people would just remember to call him Ric.

In the aftermath of a serial killer’s murderous spree, souls who didn’t deserve damnation went to Hell. The archangel Michael doesn’t seem concerned, but Icarus Fell can’t bear the guilt of knowing it’s his fault they ended up there.

But how can he save them when the archangel forbids him from going and his guardian angel refuses to help?

The answer comes in the form of another beautiful, bewitching guardian angel who offers to be his guide. They travel to Hell to rescue the unjustly damned one by one, but salvation comes at a cost and the economy of Hell demands souls.

Is it a price Icarus is willing to pay?

Bruce Blake lives on Vancouver Island in British Columbia, Canada. When pressing issues like shovelling snow and building igloos don’t take up his spare time, Bruce can be found taking the dog sled to the nearest coffee shop to work on his short stories and novels.

Actually, Victoria, B.C. is only a couple hours north of Seattle, Wash., where more rain is seen than snow. Since snow isn’t really a pressing issue, Bruce spends more time trying to remember to leave the “u” out of words like “colour” and “neighbour” than he does shovelling (and watch out for those pesky double l’s). The father of two, Bruce is also the trophy husband of a burlesque diva.