I was asked whether I had any “side stories” about the characters is The Goddess’s Choice. A better question would be, did my characters have any stories about themselves that they insisted I write? 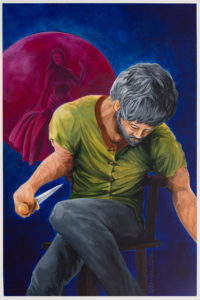 As every novelist knows, a well developed character is in some sense alive. This sounds weird to someone who is not a writer, but characters come to exist in a space of their own, which isn’t entire identical to the author’s imagination. These characters can become insistent, down right bossy, in letting an author know that there is more to their stories that needs telling. I had several of these bossy characters in The Goddess’s Choice, but the bossiest of them was Darhour, a former assassin. While some of my other characters were content with short stories of their own, Darhour insisted I write an entire novel about him.

Darhour plays an important role in The Goddess’s Choice, but he is not one of the two major characters. We meet him as the Master of the King’s Horse who has a terribly scarred face and an especially fondness for the princess. Later, we learn that he was once the world’s most notorious assassin who has since taken a vow never to kill again. In The Goddess’s Choice, we learn some things about his past and why he feels such a strong attachment to the princess. But Darhour let me know in no uncertain terms that he was not content with what I’d told the world about him in this novel. He wouldn’t leave me alone until I had written a novel, which both tells his story after the end of The Goddess’s Choice and relates his past so that the reader understands what turned a simple stable groom into a killer.

While a man whose killed more people than he can remember may not sound like a sympathetic character, Darhour knew that once readers fully knew his story, they would not judge him harshly. As one reviewer put it, “While he sounds like a ruthless, heartless character, after learning his story, I couldn’t help but really fall in love with him.”

So if The Goddess’s Choice piques your interest in the world’s most notorious assassin, know that in The Ghost in Exile you can find the rest of his story.

Have you created any bossy characters? Tell us about them in the comments. Or is there a minor character in a novel you wish the author would develop in a novel of her/his own?